Your drive is one of the most important parts of your golf game. It sets the table for how you will approach the hole from that point forward. A great one can shave some strokes off of your score.

Executing a proper draw shot can put you exactly where you need to be in the fairway. A draw is when you can get the ball to curve toward the target when you drive the ball to the right of it. It can help to get around obstacles and land in the center of the fairway in line with the green.

Whether you have barely fallen short on a drive or have landed way off in the rough due to wind, it would not have happened  if you had hit a draw. For beginners, however, there is no way to know that a draw shot can make a huge difference in their game.

That is, until they see someone hitting a high and wide shot that somehow curves right back to the target. It almost looks like a golf magic trick at first, and in some ways, it is kind of like one.

The main trick to hitting a draw is controlling the flight path and trajectory of the ball off the face of your club. Follow along and learn how to draw a golf ball step by step. 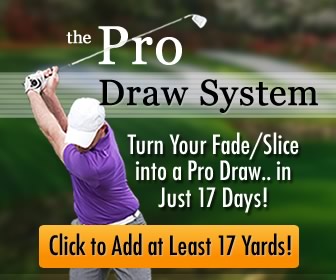 Why is it Important to Learn?

When you see the ball leave the tee and go off to the right only to curve back to the target you are aiming at, it is pretty satisfying. There are more reasons than that for why it is a key part of every golfer’s game.

Distance off of the tee is extremely important. When you drive the ball, you want to be as close to the green as you can be. That is, if you want to make it under or on par.

Hitting a draw is one of the best ways to add some distance to your shot. The added distance of a draw can help you out on par 4s and par 5s in particular. If you keep track of the wind, you can use a draw to your advantage and add even more distance.

On holes that are not a straight shot, hitting a draw or a fade is a great way to land in line with the hole. In golf, it is important to make every stroke count. A fade is the opposite of a draw and the ball curves from the left to the right.

How to Draw a Golf Ball With a Driver

Before you can begin, take a look at your driver. Now, get in your preferred golf stance holding your driver down. Check to make sure your club face is in closed position so that you can’t see the face when looking down. If you want to hit say, a wedge shot, you would use an open club face as demonstrated on the right in the graphic below.

With draw shots, the ball is not going to curve properly unless the club face is closed. Familiarize yourself with a comfortable hand and wrist position that keeps the face of your driver closed. If you are right handed, that means it will be aimed slightly to the left of the target.

You don’t need to forget about your old grip, you just need to change it moderately. The feeling of your club hitting the ball is different when hitting a draw shot. Your hands will end in a different position than with a typical drive or a fade.

To accommodate for that, you need to make your grip stronger. Look at the below image. On the right, you can see a grip that would be fine for a regular shot. It is not strong, but it is not weak.

On the left, if you notice, his thumb is no longer on the grip and his left hand is slightly rolled under the club more. That comes in handy when you follow through. When you hit a draw, you want your hands to roll over more like you are hitting a baseball than a golf ball. Just like with a regular shot, a draw will only go where your body is in line with. That is, unless you take your head off of the ball or follow through wrong. To line up a draw, however, you do not take the same alignment as a straight shot or even a fade.

Instead, you give yourself slightly more distance from the ball. Scoot back away from the ball to where you can still make contact, and shift over so that the ball is closer to your back foot, slightly off center.

The foot positioning on the left in the above image is perfect draw shot alignment. His body is still evenly poised, and his club face is closed. Despite being stepped back slightly in your stance, your head should still be right above the ball.

Much like a regular swing, if you take your head off the ball before following through it will shank or slice. Because the ball is slightly closer to your back foot, you will make contact with the ball earlier in your stance than usual shots.

#3. The Backswing is Key

When you are learning how to draw the golf ball with a driver, one of the trickiest adjustments is the downswing. There is not a huge difference, but if you are used to doing it one way it can be confusing at first.

Don’t think of it as changing your backswing entirely, but instead modifying it slightly. When you start the backswing, try to limit your shoulder and hip movement. Throughout the swing, keep your arms straight One common draw shot mistake for newer golfers is when they try to adjust the path of the club itself. When swinging for a draw shot, you don’t need to angle your club itself to the left or right. That will only result in a ball going in the woods, water, trap or deep rough.

The only angling that you need to do for your club is the closed club face starting position.

Following through may be the easiest part of hitting a draw. At the top of your swing, release and as you are following through, pivot on your hip so that your when you are finished your chest will be facing the pin and your weight will be on the toes of your back foot. Do you notice how his chest is facing outward towards the target? Alignment is just as important in your finishing position as it is on the set up and backswing.

As soon as your closed club face strike the balls, roll your wrists over as you pivot and wind up with your chest facing out. Look at the wrists of the golfer in the image below.

Her grip is adjusted just enough to be as strong as possible and her wrists are rolled over.

Conclusion – Anyone Can Do It

After getting the basics of a regular golf swing, the draw shot is a logical next step. It entails all of the same basics and relies on alignment and positioning just like any other shot.

Hitting a draw can give you extra yardage on those big par 4 or par 5s. A well-executed draw shot that lands in line with your target can make the difference between a birdie, par or bogie. So long as you remember the key steps, you should be able to draw the ball off of your driver easily.

Besides those basics, everything else there is to learn can only come from practice. Going to the driving range and practicing draws is the perfect way to learn fast. That way, you can try to draw ball after ball so when it is time for match play, you are not playing catch up.

Every golfer should have draw shots in their bag of tricks. It is right up there with fades, lay-ups, and flops. Learn draw shots and practice them to improve your golf game in ways such as:

In short, mastering the draw shot can make you a more versatile golfer. Learning how to hit a draw early in your golf career means that you can focus on adding more types of shots to your bag of tricks.

How to Stop Topping the Golf Ball

How To Hold A Golf Club

How to Swing a Golf Club

How to Chip a Golf Ball